Last week I traveled to Miami to attend Bitcoin 2021, the world’s largest crypto conference. Around 12,000 people attended this year. It was an amazing experience. I met fascinating people, learned a ton and discovered many innovative companies doing good work.

Despite all the drama happening around Elon Musk and bitcoin’s price, I came out of the conference more excited about bitcoin than I’ve been in a long time.

Today I’m going to discuss two of the hottest topics from the conference. (Note: If you want to watch the main stage presentations, Bitcoin Magazine has made them all freely available on Youtube).

There’s no getting around it: crypto’s recent volatility has been brutal. This correction was sharper and faster than any we saw during the 2017 bull run.

(It’s worth noting that there was a worse drop in April of 2013 during that bitcoin bull market. At the beginning of April 2013, bitcoin traded around $220, then fell to $70 by mid-month before resuming its upward climb to a peak of more than $1,000 that cycle. Nevertheless, the recent drop is acute and the scale of everything today is much larger.)

One of the reasons for the heightened volatility this time is the increasing use of leverage. Both retail and professional crypto traders across the world have been using leverage in an attempt to pump up their returns. For example, if you have one bitcoin, at many exchanges you can trade as if you had three, four or even more than 100. Leverage has become so easy to access, almost anyone can use it.

The problem with this is that if bitcoin moves down 20% and you’re leveraged 10 times long, your account can easily get wiped out. Exchanges will automatically liquidate a position if it goes down too much. As CNBC explained…

Bitcoin traders liquidated roughly $12 billion in levered positions last week as the price of the cryptocurrency spiraled, according to bybt.com, a cryptocurrency futures trading platform.

“Selling begets more selling until you come to an equilibrium on leverage in the system,” says JMP’s Devin Ryan.

Naturally, this was a big topic at the conference. I suspect that leverage explains why bitcoin’s price action was so exaggerated compared to 2017. Hopefully this pullback has taught (some) traders a valuable lesson about the dangers of leverage. Many people got scorched over the past few months. I hope traders won’t be so cavalier going forward. My advice is to avoid leverage unless you’re a pro with an amazing track record. Nothing goes straight up.

Because leverage played such a major role in recent volatility, I think this correction is likely a mid-bull-market pullback — a necessary correction in an overheated market. It could also be the top of the market for a while, but I don’t think that’s the case. At $60,000 we were up only three times from the previous cycle high. Previous bitcoin bull markets have risen significantly more.

It’s also important to remember that we have an amazing macro tailwind. As I say too often, we’re experiencing historic money printing, debt and low interest rates. Inflation and money printing are primarily driving bitcoin adoption. And I don’t think that will change anytime soon.

The next 10 years will be interesting. Here’s what I wrote back in March.

We were already well on our way to Modern Monetary Theory (MMT) before this all began, as I noted back in November 2019.

COVID moved up the monetary timetable significantly. And the response has been staggering so far. I suspect support/stimulus packages will continue and even increase over coming years. They cannot stop at this point. We need ultra-low interest rates, huge government spending and money printing just to maintain the status quo. There’s simply too much debt in the system.

If the Fed Funds rate rose from 0.25% to 3-4% (lower than the roughly 5% long-term average), the financial world would implode. We saw what happened in 2018 when the Fed tried to raise rates. Disaster. Companies and governments would start to drown in the interest costs alone.

Here’s my take. Crypto went up too far, too fast, fueled by leverage. A nasty correction was almost inevitable. I don’t claim to know what will happen next for crypto markets, but I remain extremely bullish over the mid- and long term. We could still have more room to the downside, but I’m betting the bull market trend is still underway. What I learned at the conference reinforced this.

According to multiple knowledgeable sources at the conference, there’s still a lot of institutional (and retail) interest on the sidelines. Let’s see if they step in to buy the dip.

Unsurprisingly, bitcoin’s energy consumption was another hot topic. We heard some great arguments from smart people about why bitcoin’s energy use is not nearly as bad as it seems at first glance (ahem, Elon Musk). Here are some of the more salient points:

It was clear from the conference that bitcoin miners are well aware of their perception problem. And they’re working hard to address it. Those who aren’t currently using renewable or green energy are certainly considering moving in that direction (or buying carbon offsets). Last month, leading mining companies formed a new council to address these issues. They had a well-publicized virtual meeting with Elon Musk to discuss solutions and share data.

Another important point that multiple conference speakers made: There’s a good reason for bitcoin’s significant electricity usage. Building a decentralized monetary system is no small task. It requires serious security that can withstand constant large-scale attacks. What bitcoin is attempting has never been done before, and it requires robust security.

Encouragingly, there are a ton of smart people working on these issues. They’re building scaling solutions such as the Lightning and Liquid networks. The bitcoin community is also making improvements like Taproot, which among other things will implement Schnorr Signatures, allowing higher efficiency, privacy and flexibility.

I came away from the conference convinced that bitcoin’s energy usage is largely misunderstood. That said, there are some valid criticisms that the industry is actively addressing. I plan to write more about crypto and energy going forward.

How I Got to the Conference

A month ago, I wasn’t expecting to be at Bitcoin 2021. But a few weeks back I was invited by HIVE Blockchain (OTC: HVBTF), which was an event sponsor. HIVE executive chairman and interim CEO Frank Holmes was a speaker. (Vin Narayanan interviewed Frank in April for First Stage Investor members. Click here to sign up if you’re not a member.)

HIVE is a cryptocurrency mining company with operations in Canada, Sweden and Iceland. It primarily mines bitcoin and ethereum. It operates in locations with cool climates, low-cost green energy and stable governments.

It’s a fascinating company and I want to thank the team for inviting me. Attending the conference was a once-in-a-lifetime experience. Full disclosure: As of this month, I am doing consulting work for HIVE. (I will still be writing for Early Investing too.)

Have a great weekend, everyone!

P.S. Major bonus: Your humble editor got to meet Dr. Ron Paul! He gave a speech at the conference on the topic of monetary freedom, which I highly recommend watching. 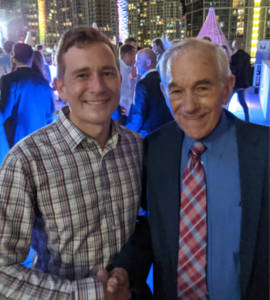